Oakdale is a city in Washington County, Minnesota, is a suburb of Saint Paul and is on the eastern side of the Twin Cities Metropolitan area. The population was 27,378 at the 2010 census. Oakdale is the 32nd largest city in Minnesota, in terms of population.

Imation (now known as Glassbridge) World Headquarters was located in Oakdale. Nearby 3M Headquarters employs many residents of the city.

Oakdale, Minnesota is currently the most populous of all municipalities that share the name Oakdale in the United States. 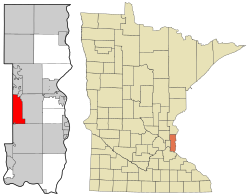