Medina is a city in Hennepin County, Minnesota. The population was 4,892 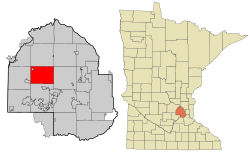