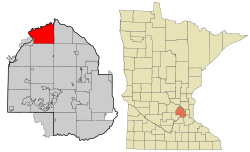 Rogers has multiple schools within its borders, including four public schools: Rogers Elementary,Hassan Elementary, Rogers Middle School, and Rogers High School, with the mascot being the Rogers Royal. Numerous private schools have also cropped up over the city’s history. Rogers High School was ranked #32 in Minnesota for 2018 by U.S. News and World Report based on performance on state-required tests and how well they prepare students for college.